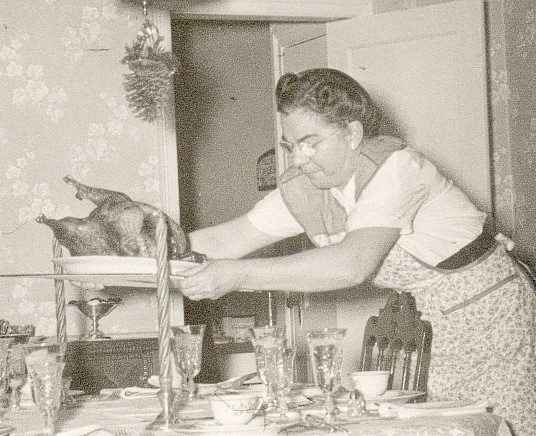 If Cleopatra was the face that launched a thousand ships then “how did Grandmom make those breaded asparagus?” is the question that launched our family’s cookbook. I come from a long line of wonderful and imaginative cooks. A treasured recipe my great-grandmother brought with her to America was her biscotti. Her secret ingredient, we’re told, was red wine. Of course, my family put red wine in everything including my brother’s milk to stop his crying…it worked.

Why a cookbook? Family recipes are a way of keeping our ancestry alive. The smell of most foods can evoke vivid memories of our childhood and the family members who made them. Food itself can remind us of experiences helping us relive feelings of comfort and love. I remember having breakfast with my Aunt Kay at my Grandmother’s home. Her breakfast consisted of 2 pieces of toast, a cup of tea and a soft boiled egg. She would break open the shell with a knife, scoop out the egg leaving a little of the white inside the shells and give them to me. Comfort and love.

I contacted many relatives asking for their favorite recipes. Some included pictures and stories along with the recipe so I decided to use them here and there. One day as Jeff was looking through the mountain of pictures and stories he asked, “Where does this person fit into the family?” This is an example of insanity breeding insanity – I decided to include family trees! The labor of love began and nine months later, “Relatively Cooking” was born. I had 85 copies printed and sent them to family and friends. The response was overwhelming, but not what I thought it would be. You see, I was so excited to get the books in the mail I failed to have someone proof my work. The mistakes and typos were quickly and humorously called to my attention. My cousin Tony asked me if I considered him a ‘bastard’. “Why would I do that?”, I asked. His answer, in his family tree I had him born two years before his parents were married…and he was their second child! Oops. Another relative asked what type of organs should be used to make the Cranberry Relish. Organs? Oh, that’s supposed to be oranges. Oops. My brother asked what year our Dad passed. I replied 1991. I had him dying in 1987, 1989 and 1991. Oops. Finally, my Aunt Kay called in a panic! Her eggplant recipe was wrong. Not only was an essential ingredient left out but the baking temperature was too high and the time to bake it too long! I ended up sending a 3-page revision entitled “Don’t Make the Eggplant”.

Making, sharing and passing down recipes is a wonderful way to honor and immortalize family. The memories and emotions triggered by the aroma of a pot of ‘gravy’ simmering with garlic, onions and tomatoes or homemade bread or cookies just out of the oven have no rival. Sorry TV dinners.